We need to talk. We’ve been together for a long time. From my high school days through my mid-twenties. But. I’ve met someone else.

END_OF_DOCUMENT_TOKEN_TO_BE_REPLACED

A quote that sums up feelings, fear and future outcomes.

END_OF_DOCUMENT_TOKEN_TO_BE_REPLACED

One thing I really miss since doing this cleanse is greek yogurt. I used to eat greek yogurt bowls for breakfast almost everyday. Granted that as in the warmer months because who wants a cold breakfast in the middle on winter in the Pacific Northwest?  Today, however, I awoke with the familiar craving of yogurt and fruit. END_OF_DOCUMENT_TOKEN_TO_BE_REPLACED

With the holidays behind us and a new year ahead, I’m sure a lot of people have committed to some resolution or another. I’m not a huge fan of resolutions, I feel like they’re never accomplished and leave whoever made them feeling disappointed and sheepish.  END_OF_DOCUMENT_TOKEN_TO_BE_REPLACED

I’ll be honest. I only wanted this kit of liquid lipsticks because of the name. My dog’s name is Foxy, if you didn’t know. That being said, I like the products, too, so that’s nice! Click for swatches & a little {unwanted} opinion~

END_OF_DOCUMENT_TOKEN_TO_BE_REPLACED

The bloat and fatigue of the holidays has officially set in and in an effort to (literally) trim the fat, I’ve been trying out some lean snacks. Not gonna lie, I’ve definitely been binging on left over pie, but today I swapped out the stocking stuffed chocolate for curried sweet potatoes and I almost didn’t miss the processed sugar.  END_OF_DOCUMENT_TOKEN_TO_BE_REPLACED

Fruitcake gets a bad rap. It’s the gift that keeps on giving, the ultimate white elephant, Aunt Barbara’s annual dessert that gets shoved into a napkin and then the nearest trash can. But fruitcake doesn’t have to be bad, in fact fruitcake can be the perfect holiday treat. 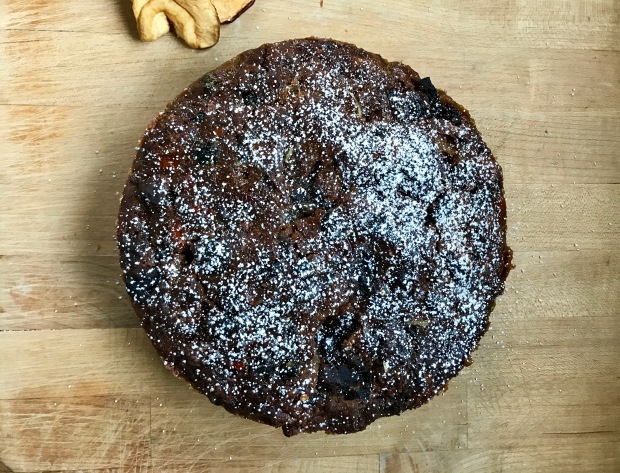 We never had fruitcake growing up, the closest thing we got was an assortment of mixed nuts. I didn’t even know what a fruitcake was until sixth grade when Mr Teal told us how gross it was. That’s all it took for me to never want to eat fruitcake…until this year. I mean seriously, dried fruit and nuts soaked in alcohol and smothered in sugar. What’s not to like?

Place the nuts in a food processor and pulse until the nuts are medium-small pieces.

In the bowl of a stand mixer fitted with a paddle attachment, cream the butter and brown sugar until light and fluffy. Add in the eggs, one at a time, scraping the bowl after each egg. Add in the vanilla and zest.

Mix and sift together the flour, baking powder, nutmeg and cinnamon. Add in half of the flour mixture and half of the bourbon on low speed. Repeat. Add in the fruit and nuts and mix until just combined.

Pour into a greased 8 inch round cake pan and bake until a toothpick comes out clean, about 1 1/2-2 hours.

Cover the fruitcake and let sit for 12 hours. Dust with powdered sugar and enjoy!

Okay, I know I say this on pretty much every post, but this really is one of the easiest recipes ever. Just dump a few ingredients in a crock pot and let it cook. Dinner is served. The best part about this recipe is that you can turn on the crock pot before work in the morning and it will be ready as soon as you get home. END_OF_DOCUMENT_TOKEN_TO_BE_REPLACED